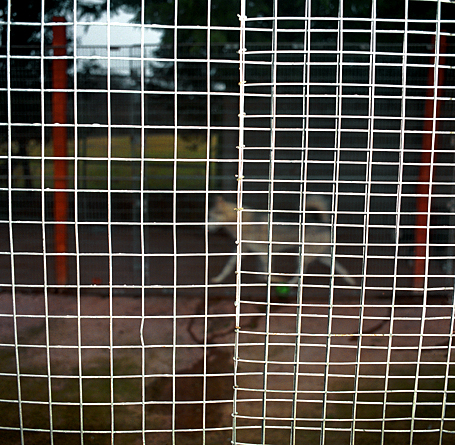 This work, produced in dog’s homes/animal shelters attempts to address the wider issues of incarceration. As a species we continue to lock away huge numbers of people who don’t fit within the parameters of what is regarded by those in power as ‘normal behaviour’, be this people committing criminal acts, political prisoners of conscience, those with physical and mental difficulties or those often innocent individuals awaiting trial.
The dogs in cages become an allegory on the wider nature of incarceration. The images produced in cooperation with one of the largest dogs homes in the North West use the process of photography to talk about issues that extend beyond the boundaries of this space.

In this context the work has a multi-facetted message depending on how it is interpreted, on one level it can be seen simply as a polemic about how we as a nation of “animal lovers” treat our “best friends”. Or it can be viewed as described above as a metaphor for the process of incarceration.

Produced with financial support from The Bluecoat Gallery, Liverpool and the University of Cumbria.